BRIEF: Completed in 2016, the brief for this garden in Chorleywood, Hertfordshire, was to create a new cottage-style garden that would unify two existing parts of the garden (top and bottom) into one cohesive design. The back of the house is north-facing so a new circular sun terrace was needed part halfway up the garden. The long and thin nature of the plot suggested the need for a meandering path through the various areas of the garden.

DESIGN SOLUTION: A new circular sun terrace was added in brick and sandstone with a curved retaining wall to deal with the level changes. New curved steps in sandstone and brick sweep around the back of the new terrace up to a curved pergola which follows the curve of the path and creates a ‘gateway’ to the rest of the garden and helps to obscure views of the shed at the back. Existing lawns were reshaped into circles / crescents which play on the circular themes in the garden and help to break up a long, thin space. Herringbone brick was used for the paths which tones in with the period style of the house and gives an established feel to the landscaping. Several new trees were added in the curves of the new path to help define the meandering nature of the new route through the space.

Planting included soft, cottage-style perennials like Lavender, Scabiosa and Delphiniums with beds punctuated by contrasting balls and cones of Yew. Rhododendrons and a Cornus contraversa were included to give scale and structure to the new beds. 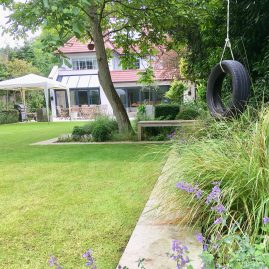 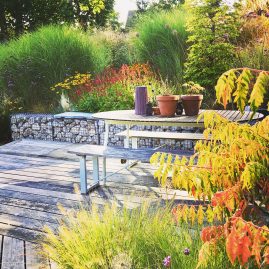 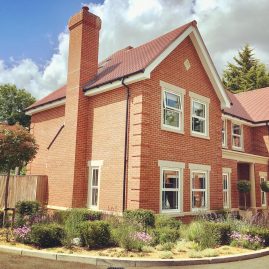 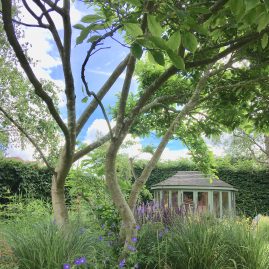 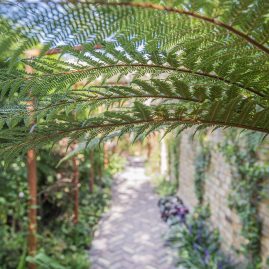 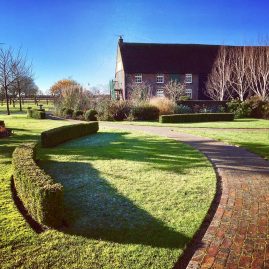 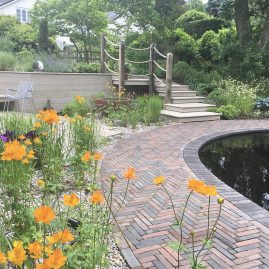 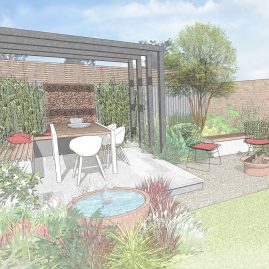